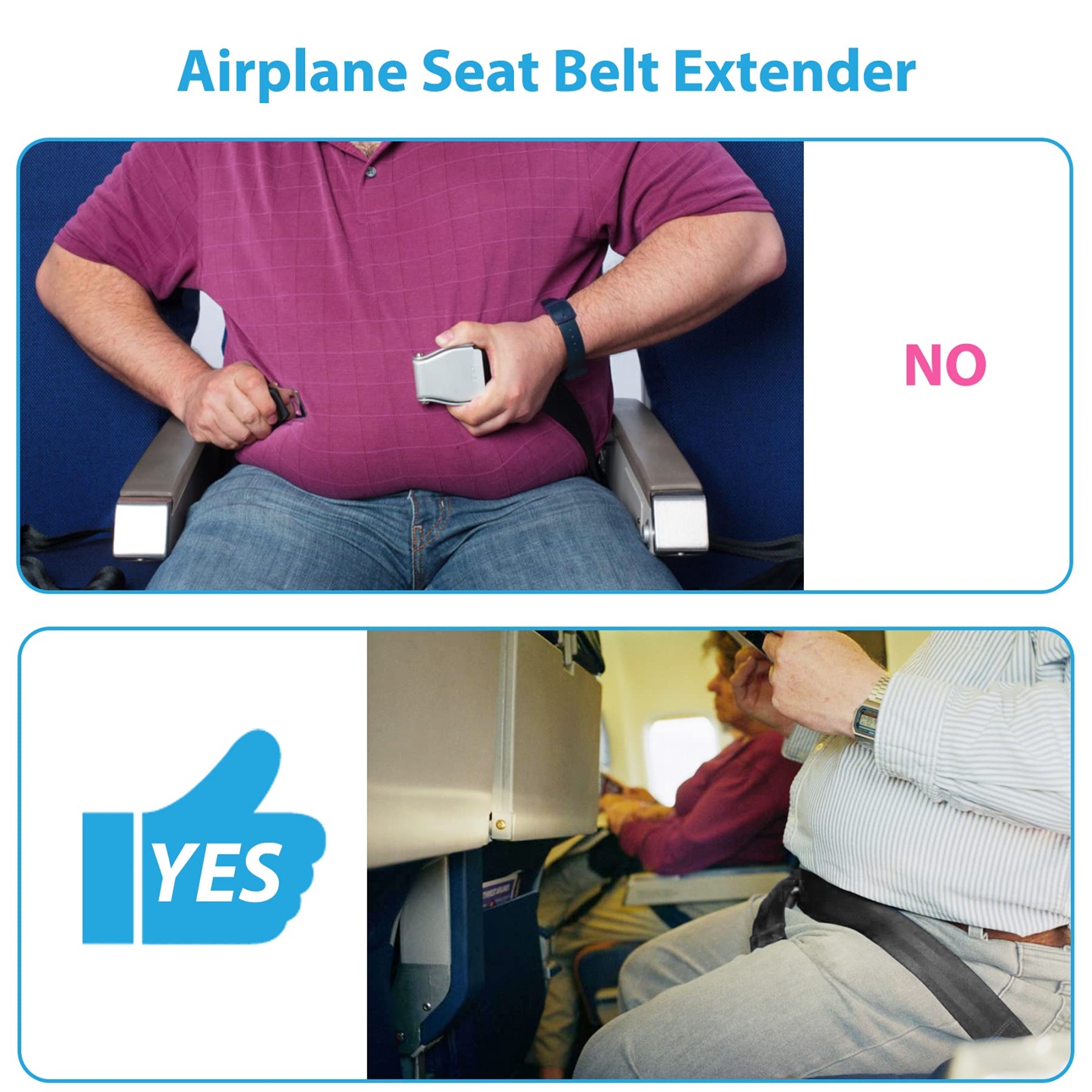 Most of us enjoy traveling. Traveling comes with some hustles that may make the adventure less fun than it was meant to be—speaking from my own experience. I enjoy traveling a lot and especially traveling by air. However, I haven’t been enjoying traveling so much lately due to my body size. I have been having issues fastening the airplane seat belts as they would not fit. This became a thorn on my flesh. In my opinion, the best way to deal with a problem is not running away from it but looking for solutions to it—this time, I had to take my advice.

Since I could not avoid air travel, I started looking for possible solutions to my problem. During my research, I learned about seatbelt extenders for airplanes. This discovery was my greatest relief. I took this as an opportunity to help people who have experienced the same issue. We have prepared this definitive guide to help more people learn about this incredible deal. Are you experiencing problems fitting airplane seatbelts? Worry no more! Here is what an airplane seatbelt extender can do for you.

What is an Airplane Seat belt Extender

A seat belt extender is an extra piece that goes between the ends (male and female) of a standard seat belt to provide more room by adding a different length to it. Overweight people and pregnant women, in most cases, require these extenders to grant them utmost comfort. No matter the reason for the flight and the destination, you will mostly need this piece. The airplane seat belt extenders were initially designed for obese and oversized people to find the comfort they wanted, especially in those long transoceanic flights.

An airplane seat extender was initially designed to help add an extra length. This is to say that they should only be used when the standard seatbelt won’t fit comfortably and not for any other reason.

All airplane seat extenders are not universal. However, most airlines use the same type of seat belts. Type A universal seat belt extender is compatible with most airline seat belts and works on most commercial and international airlines.

As aforementioned, an airplane seat extender is an extra piece that adds length to the standard seatbelt. There are two main types of airplane seat belt extenders.

This is another basic type of airplane seatbelt extension suitable for specific airlines. The type B extender is a Southwest Airlines seat belt extender and other seat belts that correspond to them. Southwestern airlines stand out from other airlines for having different seats and seatbelts. You will need a Southwest seatbelt extender because other extenders are not compatible with the seat belts.

The fundamental idea behind using an airplane seat belt extender is quite simple. You either connect it to the seat and surrounding areas using other means or slip it over the standard seat belt. However, it is easier said than done. It may be surprisingly tricky to determine how to use your extender. With different seat belt setups for different airplanes, it may seem easy in theory, but it may be complex in practice. Since extenders are meant to add an extra length to the existing seat belt so that you can be comfortable, you have to be careful not to fit the extender too tightly.

Even so, you also have to make sure that your seatbelt is firm around your waist so that it can hold you in place. Most passengers have problems determining the best airplane seat belt extension fit that will not be too tight or too loose. You realize that connecting your seat belt extender is worth your tightness and practice is necessary before your next flight. You will need to get the best way to make your seatbelt as comfortable as possible by getting a feel of how tight it is tight enough.

While connecting the extender, make sure you hear the snap sound of the belt and buckle coming in contact. This is a sign that they have perfectly connected your seat belt extender.

Before buying any product, conduct due diligence to make sure it complies with the FAA safety regulation. One fundamental FAA rule is that the seat belt should not interfere with adjacent seats. However, the FAA is not clear about what constitutes significant interference of a seatbelt extender. This seems intentional as it gives airlines the leeway to choose the type of seat belt extender they approve for use.

Every airline also has its airline-specific guidelines regarding seat belt extenders. It is therefore essential to understand FAA regulations and the specific rules of the airline you are using before making a buying decision.

Tips for Asking for an Extender On the Flight

There is a stigma that comes with purchasing an extra seat or asking for a seat belt extender on a plane because you are plus size. For this reason, most plus-size passengers will choose to carry their own unregulated and, in most cases, unapproved seat belt extenders or pretend as if the belt fits properly. Both of these options are unsafe and risky should something happen. To make things a little bit easier for you when asking for an extender from the flight attendant, we have the following tips from you.

It is easier to find your seat if you board among the first people and comfortably attract the attendant’s attention. This way, you will be able to ask for the extender without any fear of judgment. Pre-boarding also gives you alone time with the attendant to ask for the extender before other passengers get on board. Pre-boarding also allows you to choose the most comfortable seat for some airlines like Southwest.

Ask For The Seat Belt Extender As you Board

If you are worried about receiving the extender when everyone is watching, sitting in an aisle seat makes this discrete for you. When requesting an extender, do not focus on the embarrassment but on your safety.

Will I need a Seat belt Extender On Southwest?

Though it is against the rules, most people still want to buy their extenders for Southwest 747-800 and other 800 series as they find it rather embarrassing to ask from the flight attendant. However, before purchasing Southwest seat belt extender 737-800, make sure it is compatible with the plane’s seat belt.

How To Get a Seat Belt Extender On Southwest

Southwest has seat belt extenders for the customers. They are available to customers who ask for them. However, talk to the gate agents or the airline before boarding. This will help you be sure if the extenders are available or not. In general, proceed to board, and if not, you will be advised on how to proceed.

The extensions are given to customers for free, but you cannot be sure about this. In most cases, if the flight is full, chances are there may not be enough extensions for everyone. That is why we advise you to speak to the airline before boarding to know if the extenders are available. Getting the seat belt extenders on Southwest Airlines is not procedural or complex. The flight attendants avail themselves to customers upon request. If you need a seat belt extension, all you have to do is request it from the flight attendant.

Can I use my seat belt extender on a plane?

There is no guarantee that your seat belt extender will be allowed through the security checks. There is also no guarantee that you will be allowed to use it on the plane. You may even be asked to deplane if the extender does not close. For American Airlines, the policy requires that customers whose bodies extend beyond the outermost edge of the armrest by more than an inch and who need airplane seat belt extension should purchase an additional seat. Most airlines do not allow customers to bring or supply their seat belt extenders. Customers who require airplane seat belt extensions can ask for one from the flight attendants.

Where can I Buy a seat belt extender for Airplanes?

With many online sites, buying airplane seat extenders is very easy despite where you are. However, before buying, you must conduct due diligence on the online site to determine its authenticity. Not all sites can be relied upon. Research the site and even visit some of the review sites to see how customers feel about the site. Most of these sites offer global shipping, meaning you can buy from wherever and still get your shipment.

If you feel embarrassed to ask for an extender, or do not wish to double-spend by buying an extra seat to get more room. Buying a seat belt extender for Airplanes may be a good choice.

However, airports do not sell seat belt extenders. If you need an extender on the plane, you can ask the flight attendant on board.